On Monday, Tim Allen mocked Biden’s recent interview on CBS’s 60 Minutes during which the 79-year-old president dodged key questions about record-high inflation and his own mental capacity.

Biden was on 60 minutes. I heard he asked how long the show was.

The tame joke was apparently too much for many on the left to handle, prompting them to lash out at Allen and circle the wagons to protect Biden. Some also accused Allen of racism, even though the joke clearly had no racial angle.

Fuck you Tim Allen and the cult you are in. pic.twitter.com/2nKGfTo6d1

And this, kids, is why Tim Allen isn’t the voice of Buzz Lightyear anymore. He’s gone full Scott Baio. Or is it Kevin Sorbo? Meh, what’s the difference. ‍️ pic.twitter.com/n8POzLZUoe

These people are so fragile and intolerant.

Libs can't suppress their true inner hatred towards anyone who doesn't think exactly as they do. All it takes is a tame joke and their rage flows in unprecedented measures. Nice folks, aren't they? 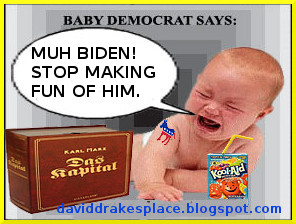 * I found NOTHING in searching that indicates Rob Fleeceman is an actual Pastor, a member of any house of worship or ordained in any type of ministry or denomination. Nice try, Rabbi.
Posted by Drake's Place at 7:18 PM
Labels: baby democrat, baby joe, biden, biological LiberTardism, dementia, Fair Use 107, hate is a liberal value, intolerance, liberal values, liberal whining, liberals, libs are haters, social media, twitter