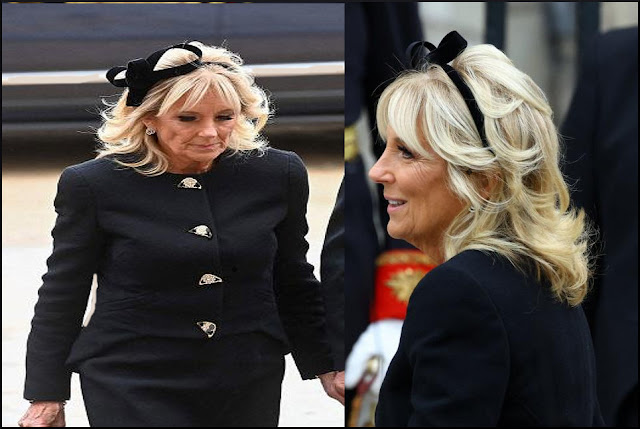 ... the first lady, 71, arrived to Westminster Abbey in London Monday donning a black Schiaparelli bespoke suit and fascinator — a piece of headwear requiring a clip, comb or headband to stay in place.

Fascinators are "often worn by women attending formal occasions such as weddings and events," according to Fascinators Direct, an online collection of hats and fascinators.

You often see fascinators at joyous events, such as weddings. While they can be worn to somber events like funerals, the more accepted etiquette would be to wear a hat as a sign of respect.
[.]
Twitter users were quick to call out Biden on the apparent fashion faux pas.

Twitter user @woobs98765 wrote that a "big black bow in your hair" isn't appropriate for a funeral.

"Why did she do that?" asked @JoBaillie4.

"That tacky headband bow in her hair at a state funeral," wrote @TruthsOverLiars. "This isn’t high tea."

"The head piece really made my designer friends gulp," wrote @jijiipetti. "It's wrong all the way around, frivolous bow for a somber funeral"

"why is jill biden wearing a party bow on her head?" asked @Airstrip_0ne.
[.]
Black hats were difficult to find ahead of the queen's funeral, according to local outlets. The Daily Mail reported Princess Beatrice left a hat store empty-handed amid a shortage of black hats in London.

I have no clue on women's fashion, especially for funeral etiquette. But the people commenting seem to know their subject. I'll take their word on this. Tacky Tamale Jill.

"Black hats were difficult to find ahead of the queen's funeral."  Well, let's see - - - Is this Tamale Jill's first funeral for a dignitary while she's been the wife of a buffoon who was a Senator for 100 years and served as VP for eight?

And it's been twelve days since the Queen died. The wife of the pResident couldn't find appropriate headgear? At least Joe didn't show up wearing his bicycle helmet.

Melania would never have made this mistake.