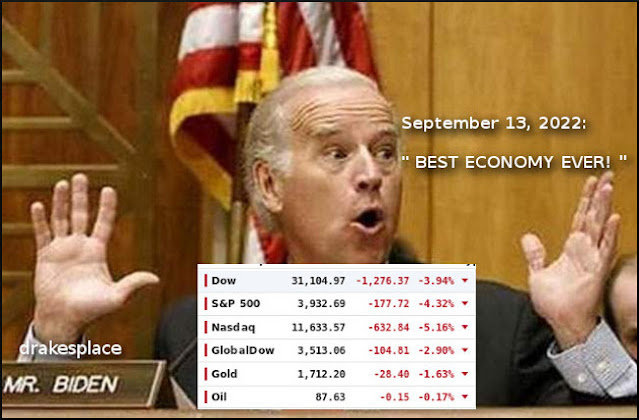 NEW YORK — Stocks tumbled to their worst day in more than two years Tuesday, knocking the Dow Jones Industrial Average down more than 1,250 points, following Wall Street's humbling realization that inflation is not slowing as much as hoped. (Insert your Shocked Face! - DD)

The S&P 500 sank 4.3%, its biggest drop since June 2020. The Dow fell 3.9% and the Nasdaq composite closed 5.2% lower. The sell-off ended a four-day winning streak for the major stock indexes and erased an early rally in European markets.

Bond prices also fell sharply, sending their yields higher, after a report showed inflation decelerated only to 8.3% in August, instead of the 8.1% economists expected.

The hotter-than-expected reading has traders bracing for the Federal Reserve to raise interest rates even higher than expected to combat inflation, with all the risks for the economy that entails. Fears about higher rates sent prices dropping for everything from gold to cryptocurrencies to crude oil.

Dementia Joe's Marxist Inflation Reduction Act is off to a great start!