Where, oh where is Hillary?

Where is Hilllary?  What is she doing? What has she been doing? Has anyone seen her recently?  Is she in the Sorosphere Illuminati Healthcare Facility, being infused with sacrificial baby blood and stem cells? Several web sites claim that Hillary is one of the alien, reptilian shape-shifting inhabitants of earth.  Is she? 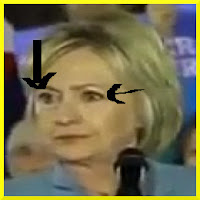 The image to the left is a screen capture from the below video.  Look at her eyes.  Other than taking the capture from the video and transforming it to a single image, I swear (other than the yellow frame and the arrows), I did NO PHO-SHOPPING of the image.  I did not manipulate it in any way.  To me, they either look satanic or robotic. Or, maybe the Illuminati implant in her head shorted out momentarily?

Then, at 22 seconds into the video, watch the man who enters from the right side of the screen and his hand goes into the inner top pocket of his suit jacket. He begins to remove something from the pocket.

At the 24 second mark, it certainly looks like the man on the right uses one hand to separate something; the way you'd use one hand to, say, undo removing the cap of a Bic pen from the pen. Within a second or so, if you watch carefully or in slow motion, you can tell he's holding something in his left hand.  The man on the right is dissuaded to do whatever he thought he might do by Hillary's "handler," the black gentleman behind her. 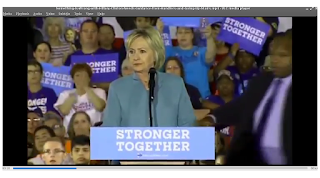 After spacing out for a few more seconds, she starts speaking again.

Her handler has been ID'ed as Secret Service agent Todd Madison.

Why does she need a "handler"? Why WOULD she need one?

Something is very "off" here.

Is Hillary an alien reptilian humanoid? The search results for this query are numerous.