Typical, hypocritical Liberals at their finest.

Senator Jeff Sessions must defend his record on Civil Rights while Democrat Robert Byrd, who spent nearly SIXTY (60) years as a Congressman or Senator, was an actual, authentic member of the Ku Klux Klan. 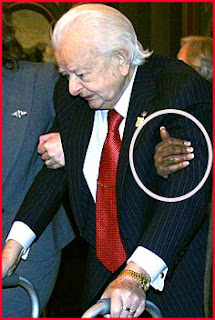 I wonder if, as he became an old, crippled, frail man he objected to having a black person assist him as in the picture to the left?

Well, it's time for a rerun from my former blog.

It's the song "The Klansman", and it is sung to the tune of The Beatles' Tax Man.

In '06 the Right seeks more Congressional seats,
Well me and my Klan will don our sheets,
At midnight we will secretly meet
To banish conservatives from the street!
Klansman! Cuz I'm the Klansman, Yeah I'm the Klansman

And you're slipping away from the Crazed Left Wing's Grasp.......

Byrd was a partisan, power-yielding swine.  He was not the "conscience of the senate" by an means.

To quote the late Clarence Darrow:

"I have never wished for the death of any man. I have, however, read their obituaries with a great deal of satisfaction."

If you feel I'm being mean, or cruel or speaking ill of the dead ---well, that's just too bad.

I'm simply pulling a page from Uber-Liberal failed radio talk show host Mike Malloy who said:  It's fun to speak ill of the dead", speaking about Enron's Ken Lay. The Mike Malloy Show - July 5, 2006
Posted by Drake's Place at 9:19 AM