Libs now hating on their formerly beloved tech millionaire, Dem megadonor Steve Kirsch. What did he do?

He asserted that he doesn't trust The Coof "Vaccine."

"REEEE! THE VACCINE IS SAFE and EFFECTIVE!"

Leftist media outlets imploded over a former Democratic megadonor who appeared on Fox News Wednesday claiming that COVID vaccines have killed hundreds of thousands of Americans and injured millions more.
[.]
[...] defiant anti-vaxxer and tech multi-millionaire Steve Kirsch, a disaffected former Democrat who contends the vaccines are deadly and is refusing to shut up about it. He has been permanently banned on Twitter over the subject.

It should be noted that Kirsch reportedly donated $20 million to the Democratic Party before deciding to exit stage left.

“Well, when they violated my trust,” Kirsch replied. “They told the agencies, the FDA, the CDC, the NIH, said these vaccines were safe and effective. And when I started seeing my friends die and be injured and I started looking at the data, there was no question this vaccine is the most dangerous vaccine ever created by man.” 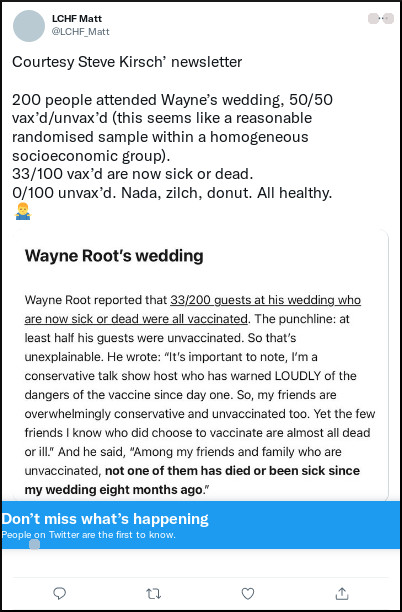 LINK and Thread
The Jabbies are addicted to their poison and the boosters. They will never admit, ever, that there are any side-effects associated with the Magic Pharma Mystery Oil. These people will adhere to Pharma's political narrative and never change. Not even as the first shovel full of dirt hits their grave or as the last bit of flesh turns to ashes during their cremation.
Never in my life have I seen such hollow, cowering quislings. It's The Cult of The Vaccinated. They're scarier and more dangerous than zombies.
BGR Archived
Posted by Drake's Place at 10:39 PM

They definitely eat their own if they don't tote the line...

CederQ, Every time. One need to look no further than Tulsi and how Dems treated, and still treat, her.