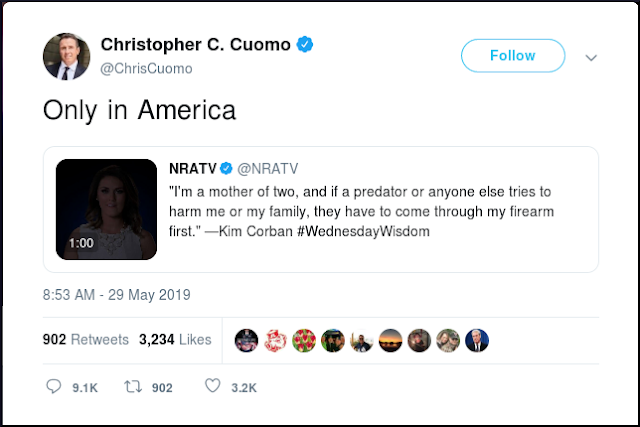 CNN Anchor Chris Cuomo thought he had a real sick burn on Wednesday when he mocked rape survivor Kimberly Corban on Twitter for saying she protects herself and her family with a firearm.

“Only in America,” Cuomo tweeted in response to a National Rifle Association video of Corban sharing about the night she was suffocated and raped in her dorm room at age 20.

Daily Mail: Backlash against Cuomo as he tries to backtrack his way out of his thoughtless tweet.


Janice Dean tweeted: ‘You might want explain this tweet a little better to those of us who’ve actually had to face predators in our own homes and defend ourselves without a big strong man like yourself?’

Liz Cheney, the Republican member of Congress, tweeted: ‘Yes, @ChrisCuomo, in America we believe women should be able to defend themselves. And we know the Second Amendment guarantees our right to do so.’

Cuomo then responded to a number of his critics, including McCain, when he wrote: ‘Read what I tweeted. You have my intentions wrong.

‘A survivor story and the right to bear arms is not where we are stuck...We can’t get past this deadlock on all or none to make reasonable changes to help reduce deadly violence.

‘Happy to talk if you have more questions.’


Cuomo: "What a wonderful surprise from Don Lemon CNN - a real birthday treat!"