Twitter Janitors' Union go on strike. Elon cancels the contract and fires them. 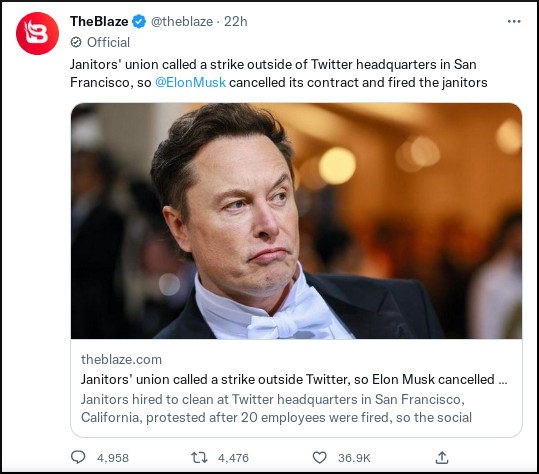 The Blaze: Janitors' union called a strike outside Twitter, so Elon Musk canceled its contract and fired the janitors.

Janitors hired to clean at Twitter headquarters in San Francisco, California, protested after 20 employees were fired, so the social media company bought by Elon Musk fired the rest of them.

Critics of Musk are outraged that he would fire the workers just weeks before Christmas.

“Our cleaning contractor at Twitter was told by Twitter that they are cutting the contract,” said Olga Miranda, union president for the janitors. “So we have about 48 families out of work. And it just so happens that it's three weeks before Christmas.”

The union members didn't realize it was three weeks before Christmas when they went on strike but they did when...they were fired? FAFO! 🤣

Another 👍 for The Elon!

So, the key question is who fired the 20 people the janitors were protesting? If they were Twitter employees that were fired whoever organized the protest by contract janitors needs a beating. I'm sure the 48 families the janitorial service needs to place or lay off now will be happy to oblige.

If the service fired 20 people the protester were even bigger idiots.

Either way, Musk will probably open a new contract with a new janitor service so ~48 new families will have jobs for Christmas.

Rick T, it sounds like the union members did a walk out as opposed to a strike. I don't what their Union Bylaws are, but if they didn't actually vote to strike, and walked off - well - like I said, FAFO.

I like your idea that 48 new people will have jobs for Christmas! Way to go in finding the silver lining!