Nadler to subpoena Barron Trump's past letters to Santa Claus. 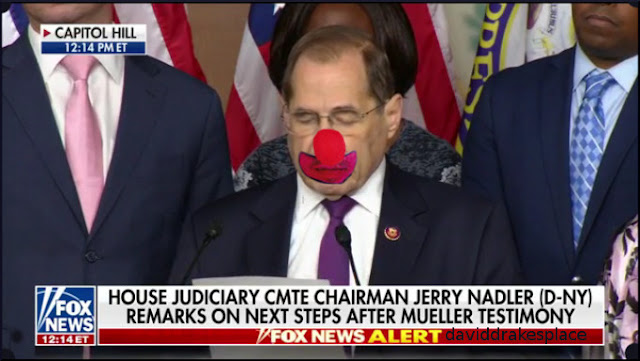 
House Judiciary Committee Chairman Jerry Nadler told reporters Friday that while his committee continues negotiating with former White House Counsel Don McGahn over an outstanding subpoena for testimony, if there's no resolution in their discussions, the committee plans to go to court seek their enforcement of the subpoena early next week.

Nadler told reporters that the committee would also be filing an application for the grand jury material underlying former special counsel Robert Mueller's Russia report.
[.]
"We will continue to seek testimony from key fact witnesses..our work will continue into the August recess," [said Nadler].
[.]
House Speaker Nancy Pelosi continues to resist those calls, Nadler said the caucus will "do what we have to" to hold the president accountable. He appeared in lockstep, however, with the speaker's assessment that in order to impeach, "we must make the strongest possible case."

Yeah, Congress needs a 5 or 6 week recess vacation because they work so hard and for such long hours...for teh peepols.

The Never-Ending Investigation is Pure Comedy Gold. The DEMS have no idea how oft-putting their Clown Show is to rational-thinking Americans.

Recall the DEMS PUMA, "Party Unity My Ass"? When, in 2008 Hillary Clinton was thrown under the bus for the presidential party nomination and instead crowned that "articulate and bright and clean and a nice-looking storybook guy," Barack Hussein Obama as their candidate?

The PUMA's rose again during the 2016 presidential campaign when the DNC dirty-tricksters threw the preferred candidate, Crazy Bernie Sanders, under the bus and rigged the nomination for Hillary. Sanders supporters did not take kindly to this.

DEMS have no concept of backfire.
-
CBS story Archived
Posted by Drake at 10:47 AM