They had to love doing this. BadAss Toys are the best! 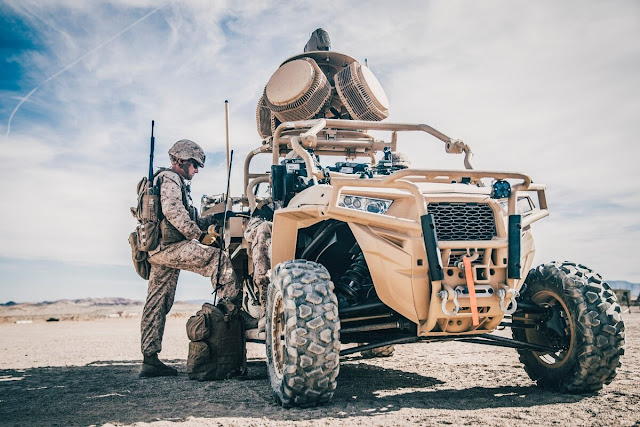 The drone-jamming and controlling system picture here is similar to the kind seen mounted on the deck of the USS Boxer as it transited the Strait of Hormuz (Dalton S. Swanbeck / Marine Corps)

... the amphibious ship USS Boxer was in international waters conducting a planned inbound transit of the Strait of Hormuz,” reads the statement from the Chief Pentagon Spokesperson Jonathan Hoffman. “A fixed wing unmanned aerial system (UAS) approached Boxer and closed within a threatening range. The ship took defensive action against the UAS to ensure the safety of the ship and its crew”

The Pentagon’s statement differs in language from the wording used by President Trump, who claimed that “the drone was immediately destroyed” after receiving multiple calls to stand down. According to CNN, US defense officials claim that the drone was disabled not by bullets or missiles (“kinetics,” in the jargon) but by jamming.

Specifically, it was almost certainly jamming via MRZR LMADIS, or a Polaris MRZR vehicle sporting a Light Marine Air Defense Integrated System. While a Corps official said as early as May 2019 that the deployment of the system to the Middle East was winding down, observers online noted that a MRZR LMADIS system was visible on the deck of the USS Boxer for its transit through the Strait of Hormuz in pictures uploaded earlier that day.

Watch over and protect our Troops, Lord. Say a prayer for Them tonight.
-
C4ISRNET story Archived.
Posted by Drake at 8:24 PM