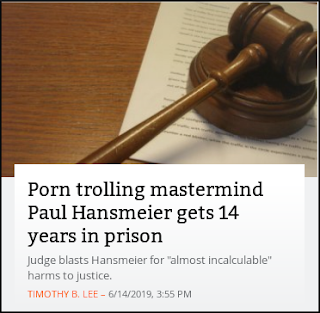 No doubt - none at all - that Hensmeier is a reprobate. A 14-year sentence isn't long enough. 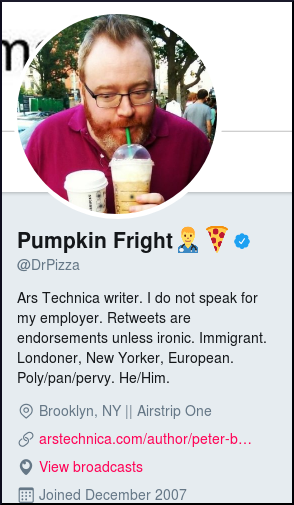 But Ars Technia hasn't published a word about their (former? still on the payroll?) writer Peter Bright, aka Dr Pizza, charged with, at the very least, soliciting sex from children.

If you dig into Bright's Twitter account, which is still active, you'll find plenty of disturbing Tweets and information. Gee, you'd think Ars would cover a Tech-news story like that. Then again, Ars has been rapidly shifting Leftward over the past years, which is a shame.

A Conservative-leaning Tech blog? Who could even contemplate such an abomination?

Ars used to be one of the top go-to Tech sites back in the day. Unfortunately, that was more than a decade ago when they actually published articles focusing solely on Tech from a Tech perspective rather than Tech through a lens filter of what's popular, politically correct and unmistakably Leftist ideology. Ars is "Factual", as noted by Media Bias, as far as Tech goes. But Media Bias is only as reliable as we interpret their neutrality, or lack thereof. Right?

From Ars Technia, (April 2010): Do liberals only read liberal blogs?

This idea that the Internet might lead us simply to reinforce our own prejudices rather than challenge them has a long academic pedigree; University of Chicago law prof Cass Sunstein (now in the Obama administration) wrote about the issue in his 2001 book Republic.com.
[.]
[As] the paper notes, there is "no evidence that the Internet is becoming more segregated over time."

Teh Internet Segregated? No, in 18 years since the above was written, Teh Web is as diverse and tolerant as ever.
Posted by Drake's Place at 9:06 PM