USA MacPaper via Yahoo (Archived): 'Excruciating': This working-class California county has the most expensive gas in the nation.

The average price for a gallon of regular gas in the county topped $6.75 this week, the highest county average nationwide, with some stations charging as much as $7.19 in mid May.
[.]
Sierra Chaltry drives 80 miles roundtrip five days a week to get from her home in the small community of Virginia Lakes to her part-time job at Epic Cafe in June Lake.

“It’s probably costing me around $200 a week,” said the 29-year-old, who has been looking for housing in June Lake for eight years without luck.
[.]
Lauren Seymore, a 35-year-old emergency room nurse, said [...] [she] estimates spending $150 to fill her tank every week.

“The gas prices are excruciating[.]”
[.}
Dore had three stations to choose from last week near her house in Lee Vining: the Mobil charging $6.69 for a gallon of regular, the Shell charging $6.99 a gallon or the Chevron charging $7.19.

"I feel helpless sometimes. What can we do?" she said. "We try to write to our congressmen and blah, blah, blah and all that but I just feel like, especially these little towns, rural America, they don't really get heard very much." 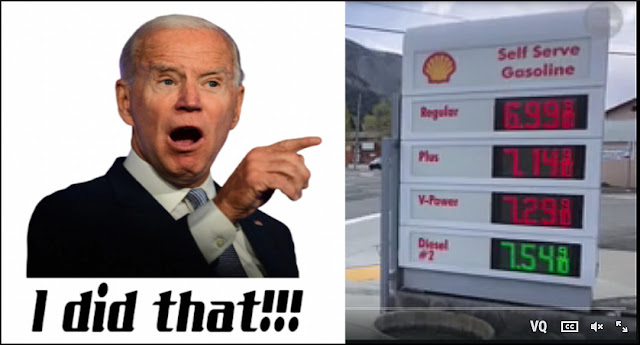 I'm thinking we'll see a nationide average of around $9.99 or so by July 4th.