Can former NBA great Dennis Rodman  be the answer in reducing tensions between the U.S. and North Korean Dictator Kimmy?

From The Star Telegram:


[Rodman] appeared on “Good Morning Britain” via satellite from Los Angeles on Wednesday and was asked about his relationship with Kim and the multiple trips to North Korea.

The majority of the conversation with hosts Piers Morgan and Susanna Reid centered on their activities, such as singing karaoke, riding horses and just sharing laughs without discussing politics.

I must interrupt this post to note that, IMO, Piers Morgan is a total, unadulterated, complete piece of used and discarded butt-wipe.

Daily Mirror editor Piers Morgan has been sacked after the newspaper conceded photos of British soldiers abusing an Iraqi were fake.

This is the front page Morgan falsified:

Ponder the motives behind an EDITOR of a MAJOR NEWSPAPER in approving FAKE NEWS.

Morgan also mocked President George W. Bush for falling off a Segway, and later, Pierszzzzzzz-zah fell to the pavement from his Segway ride.

I never get tired of watching that clip.

Pierszzzzzzz-zah broke three ribs from his fall; strangely - prior to that - he called riding a Segway "idiot-proof."

Welcome to The Idiots Hall of Fame, Pierszzzzzzzzzz-zah, where you are bestowed Chairman of the Board, CEO, CFO, COO, CIO and President of The Worldly Idiots Clubs.

I'm not a big Hugh Grant fan, but just who the hell is Pierszzzzzzzzz-zah to call Grant a "tedious, little man." And as only a selfish, insecure two-year old would act, Pierszzzzzzzzz-zah banned Grant from appearing on his program. Pierszzzzzzz-zah - a fat, pie-faced, pseudo-intellectual gnome - is simply jealous of Grant, a handsome guy.

You may be asking, "where does a fired newspaper editor who engaged and fostered FAKE NEWS, get a job?"  Why, CNN, of course.

And it's clear that "Good Morning Britain"  has no journalistic code of ethics that applies to whom they hire.

Back to Dennis Rodman. From MSN:

Rodman, 56, has made several trips to North Korea after developing a friendship with North Korean leader Kim Jong Un over their shared love of basketball. Kim is reportedly a big fan of the 90s Chicago Bulls. Rodman's last visit came in June.

As long as President Donald Trump has said, regarding North Korea, "all options are on the table," who knows if Rodman can make a difference? Maybe he can. We don't know. I don't see how Dennis can make things worse. Let's give him a chance.

Maybe Kimmy wants is his own NBA franchise?

Let Dennis do his thing. If what he does, in any way, helps bring about some type of détente between the U.S. and NK, it doesn't matter who or how we get there - only that we get there. 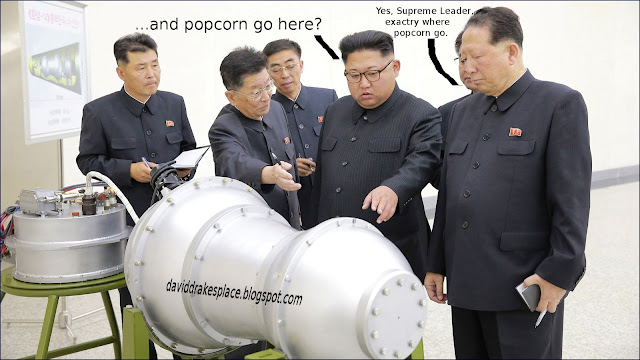