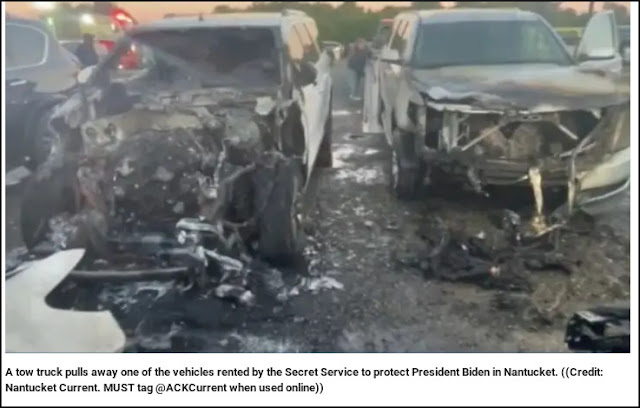 President Biden's rented Secret Service vehicles burst into flames in a parking lot Monday, just one day after he left his Nantucket vacation.
[.]
The Secret Service rented five vehicles from Hertz to carry the president and his family, and all five of them caught fire in the parking lot, according to footage first obtained by the Nantucket Current.

The vehicles were parked at the Nantucket airport and the blaze reportedly spread to just 40 feet away from the facility's jet fuel tanks. It is currently unknown what caused the fire. Fox News reached out to the  White House for information, but they did not immediately respond.

Biden will blame these fires on his usual go-to perps: Trump, Putin or Climate Change. The truth is probably these vehicles did a self-sacrifice and self-combusted to cleanse themselves of Biden Cooties.

Here's a speculative response from an anonymous message board:

You can't make this stuff up.

Start looking at missing persons reports in the Nantucket area.

EX, Sure sounds like shenanigans. 4 burn simultaneously? Destruction of evidence of something, huh?

It doesn't look like any of the cabins burned, so any DNA evidence would still be there. Maybe destroying evidence of where else the Potato went on the island??? Too many miles clocked or speeding?

Rick T., You bring up a good point. It just seems very strange that 5 RENTAL vehicles would combust like that. The other odd part of the story is the WH and Secret Service left the investigation up to Hertz Rental to determine. Uh-huh - Hertz.