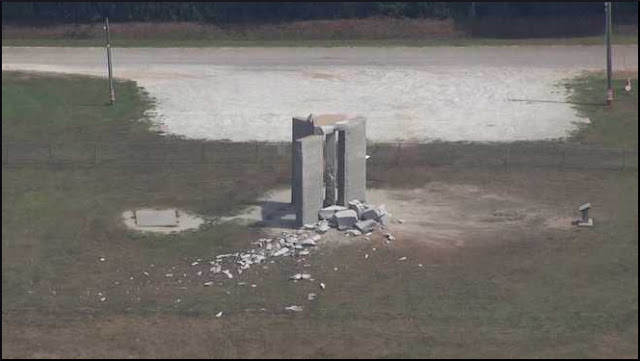 Authorities have multiple roads closed surrounding the area where the Georgia Guidestones are in Elbert County.

According to multiple people on social media, an explosion of sorts was heard in the area around 4 a.m. on Wednesday. Some shared images showing debris near the stones.

11Alive has reached out to police in Elberton, the Elbert County Sheriff's Office and the Georgia Bureau of Investigation.

The GBI did not confirm or deny our question about the explosion, but said they don't have any "releasable details yet."

The people who funded the statue have never been publicly identified. The messages inscribed on the stones seem to advocate for population control, harmony with nature and internationalism, which has made them the object of conspiracy theories.

It’s unclear if the monument was targeted in an attack or if it was somehow damaged by natural causes.

Oh, I bet I know how this happened. CERN was fired up on July 5. It's CERN's fault!🤣

OR...a very gassy Stacey Abrams was nearby and broke wind.