Breitbart: President Joe Biden announced Wednesday afternoon he has approved sending 31 Abrams M1 main battle tanks to Ukraine, in an escalation of U.S. support for the war as it nears the one-year mark. 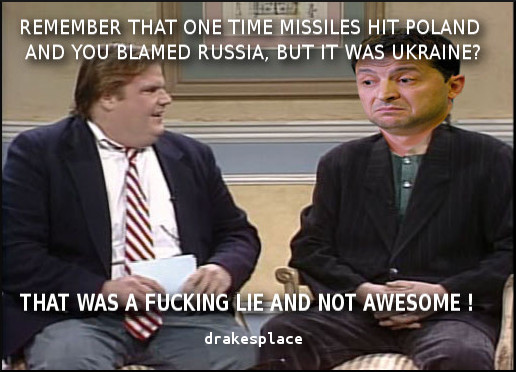 The Guardian: Missile that hit Poland likely came from Ukraine defences, say Warsaw and Nato.
Poland says no evidence to suggest missile was launched by Russia – but Kyiv insists ‘it was not our rocket’.
Never in my life have I seen Democrats displaying such turgid tumescence for a war that the U.S. has no business involving itself in. Of course, this is an important conflict for all the personal grift, enrichment and money-laundering for the families of Biden, Pelosi, Romney and Kerry. AND Mitch McWorthless.
Posted by Drake's Place at 11:00 AM
Labels: biden, EU, Fair Use 107, global news, IMF, john kerry, liberals are liars, military, nato, pelosi, poland, putin, romney, russia, tech, ukraine, UN, WEF, world war III, zelensky