Bernie Sanders hospitalized in Vegas. Blockage in an artery. 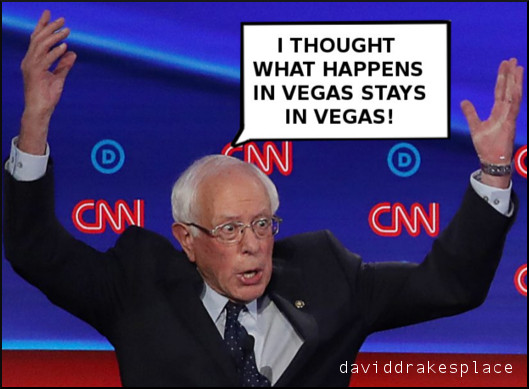 "During a campaign event yesterday evening, Sen. Sanders experienced some chest discomfort. Following medical evaluation and testing he was found to have a blockage in one artery and two stents were successfully inserted," said Sanders’ senior adviser Jeff Weaver on Wednesday in a statement.

"Sen. Sanders is conversing and in good spirits. He will be resting up over the next few days," Weaver said. "We are canceling his events and appearances until further notice, and we will continue to provide appropriate updates."

It is curious why Sanders sought medical treatment in the U.S., a country with the most deplorable and atrocious health care, instead of being treated in Cuba or Canada. He must have that Platinum Level ACA Health Coverage that only rich people can afford.

Get well Bernie. Your comedic value in the campaign can't be replaced by any of the other candidates.
-
ABC News Archived
Posted by Drake's Place at 10:28 AM