Jihadists have killed 10 UN peacekeepers and wounded at least 25 in northern Mali.

All of the peacekeepers killed in the assault on their camp in Aguelhoc were from Chad.


[Arrested was] Dov Tenenboim, a self-described "elite hacker" who allegedly masterminded a scheme to import a huge volume of drugs from the dark web worth millions of dollars to addresses across Sydney's eastern suburbs.


Parents at a secondary school in Wythenshawe have been told to 'seek medical advice' if their child falls ill after concerns about a batch of chicken burgers.
[.]
The principal confirmed there were concerns about the chicken being undercooked, after a parent [said] her daughter was served pink meat.


...hailed by vegans - and feared by farmers...
[.]
[Barbara Bolton, co-founder and volunteer with Go Vegan Scotland said], "They should shift subsidies away from meat, dairy and eggs, tax those products, and use the funds to support plant-based agriculture[.]"

A Socialist concept designed for taxing meat and dairy and redistributing that money for the vegans. Yeah...When they take the steak and bacon from my cold, dead hands.
- - -
Zimbabwe News: Man ridiculed, called a "sissy" for carrying baby on his back.


A majority of people, in the country’s patriarchal society, say the man is a “sissy” and should not stand up when men are being counted.
[.]
“I was touched by the love displayed in this video, and the gesture of responsibility and care demonstrated by this father carrying his baby; despite the abuse he received,” [posted a Facebook user].
[.]
The boos continued unabated on social media. “This guy is now a full-time woman in UK I think . . . "]. 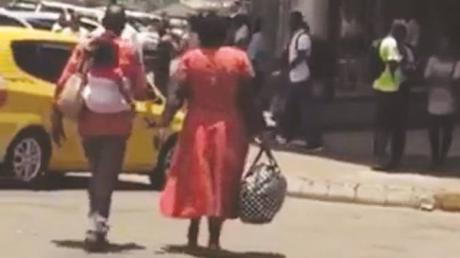 ...providing women with suitable areas and distances to practice their work or separate counters, ensuring privacy and independence in the women’s sections of office working environments not assigned to receive customers, not employing women in cleaning facilities or rooms and carrying bags in relation to the tourist accommodation sector, except those for women only.

- - -
The Belize Guardian: The cost of gasoline drops...to under ten dollars a gallon.


The Ministry of Finance is pleased to announce that at midnight on January 17th, the price for premium gasoline will decrease by a further 52 cents, from $10.47 down to $9.95 per gallon.