It doesn't get deeper than this.


Billionaire George Soros warned of the "mortal danger" of China's use of artificial intelligence to repress its citizens under the leadership of Xi Jinping, who he called the most dangerous opponent of democracies.

(This has to be parody/statire, right?)

“I want to call attention to the mortal danger facing open societies from the instruments of control that machine learning and artificial intelligence can put in the hands of repressive regimes,” the 88-year-old said on Thursday at the World Economic Forum in Davos, Switzerland.

"China is not the only authoritarian regime in the world but it's undoubtedly the wealthiest, strongest and most developed in machine learning and artificial intelligence."

"This makes Xi Jinping the most dangerous opponent of open societies," he said.

So at age 88 is this the latter stages of dementia for this corrupt, menacing, evil force? Has he looked at himself in a mirror lately? Do his words sound familiar to anyone else...words spoken about him?

The Atlantic via WIRED says Mark Twain never said this, but I'll paraphrase it for myself. "I don't wish for George Soros to die, but reading his obituary will bring me no grief." 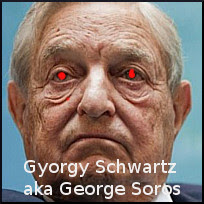