In a previous post I noted that in the Liberal manufactured non-altercation altercation, American Native, Nathan Phillips, deftly executed de-escalation between the law-abiding MAGA-cap wearing students of Covington Catholic High School and the Black Hebrew Israelites. Maybe the motives of Mr. Phillips weren't entirely the altruistic intentions to de-escalate a potential and  explosive confrontation. Maybe some, part, or all of his agenda was pure Liberal activism. He has a history of activism.

Mr. Phillips served our country in Viet Nam. I Thank Mr. Phillips for his service to our country. He is the only one who knows his true intentions. Did he make his move to de-escalate based on sincere motives in attempts to prevent physical mayhem or was it a political calculation? He's the only one who holds the true answer. Does it matter, really, either way?

It was the Black Hebrew Israelites instigating the Covington, Kentucky students. Some of the students had the gall to wear MAGA hats in public. Should we line them up before a firing squad? Remove their MAGA hats, blindfold them, let them smoke a final cigarette?

Why would anyone expect anything based from social media to be true or even near accurate, without first making efforts to verify? And even then, we don't know the true story. Look how long it took before it was discovered that the Homeless Vet-GoFundMe story was a scam. The U of Virginia fake rape story is another example of many.

Those of us holding dissimilar political ideology from The Deranged Left are asked to be tolerant of Trump-haters wearing vagina hats, representations of "art" depicting the slicing President Trump's throat, calls to lock the Trump children in cages, elected officials referring to Trump saying "we're going to impeach the motherfucker", countless hours devoted to fake news about Trump and is administration and a list as long as the Great Wall of China of one, negative, slanted story after another about Trump and his admin.

I hate to even mention them, (you can search for them), but spend some time reading at Raw Story or Vox. They're a joke. Fiction. Their stories read all the same:


"[Insert any imaginable impeachable offense] IF TRUE, could pose big problems for Trump."

"An anonymous former White House insider confides that [insert horrible thing about Trump]. IF TRUE, this is the end of Trump."

And people believe this.


Liberal activist group Code Pink posted a video on Facebook of the organization's founder, Madea Benjamin, passing out copies of the paper at what appears to be a Capitol Hill office building.

In the video, Benjamin tells people, "The crisis is over - Trump has left the White House." Later, she adds, "You gotta believe in the Washington Post."

Benjamin reads a headline, without hesitating concludes "you gotta believe in the Washington Post", and proceeds to disseminate inaccurate information. Genius! Liberals now "Question Nothing" as opposed to not so long ago where they encouraged everyone to "Question Everything." 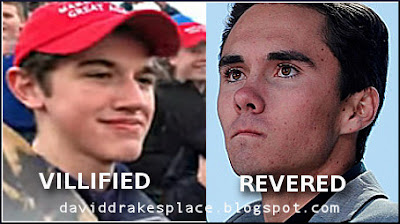 Technology provides us the luxury of an amazing amount of online information and resources on all subjects and stories. We have ample opportunity to look at multiple sides of any story, and then assessing - with as much information as we can learn from all sides - a conclusion based on what our searches gathered. Instead, technology as hastened knee-jerk reaction to an all-time high with no one looking beyond the first three search results, let alone pages two or three.

Read something from one source (especially the one that reinforces your preformed "beliefs"). Assume it's true. Immediately publish a comment on social media, throw up a clip on YoutTube, text someone dis/misinformation, mass email the news to your Antifa members. All within seconds.

Your character, of lack of it? Assessed in nanoseconds based on your skin color, gender and if you're wearing a MAGA hat. This, from the Liberal mindset that prides itself on "how can you KNOW ME based on my appearance?"

Don't expect the MSM or social media, in future similar instances like the above, to take time and research the backstory. "Instant News", verified or not, will continue. Leading up to the 2020 presidential election, I'm guessing it will get increasingly ugly and more disgusting than we can imagine. Intolerant behavior from The Left will reach heights exceeding our wildest imagination.
Posted by Drake's Place at 4:34 PM