The photo, which appeared online Thursday, showed two students giving the Nazi salute while holding a sign which said, "Sweethearts would be a Hit(ler) w/ you, and I could Nazi myself going w/ anyone else. Be Mein? Yes or Nein".

The story goes on to name school personnel and their condemnation of the image. It's good they go on record, but did anyone expect that someone in the school administration might say, "I think that photo is great. Hoo-ray for the students individuality and initiative"? 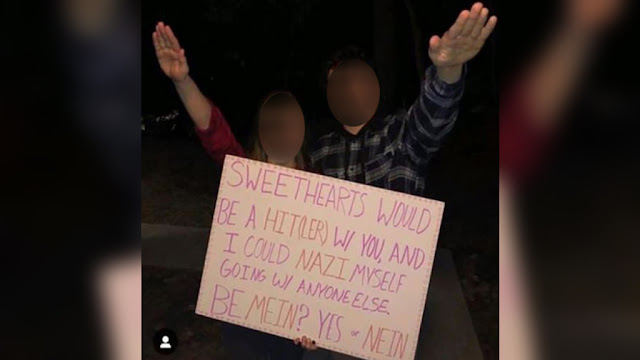 A small, SMALL fraction of our youth, (and gen pop), are going to do stupid things like this from time to time. Those offended have ample forums, especially with social media, and rightfully express their side. All the "viral shit" that goes around - - - I often go out of my way to avoid it.


The Minnesota Sport Facilities Authority Friday approved an increase of $186,870 to a $1,257,425 contract with Chicago Flyhouse, the company providing some of the blackout curtains required at U.S. Bank Stadium to host this season's NCAA men's basketball Final Four.

NCAA officials have said the drapes are necessary to ensure consistent lighting for teams. Authority members say the increase to the Chicago Flyhouse contract will allow for the addition of two "acoustical curtains" to improve sound quality in the stadium.
[.]
The MSFA argues the window coverings should not be counted as part of the cost of hosting the Final Four because the improvements will also be used during future events.

Mangers also dismissed public criticism that the $6.9 million operating cost for the Final Four is significantly more than the MSFA's cost to host the Super Bowl in 2018. For that event, the NFL offset many of the costs, leaving the Authority with a tab of just $627,000.

"The stadium is built for football, so doing a football game is pretty easy for us," said SMG general manager Patrick Talty. "We're putting a basketball game inside of a football stadium which takes a lot more coordination, a lot more build."
[.]
A study commissioned by the Minnesota Local Operating Committee estimates the Final Four could have an economic impact on the region worth $142 million.

Would anyone expect a study, commissioned by the MN Local Operating Committee to reach a conclusion other than a rosy forecast that "could" have a positive economic impact worth millions? Why, I bet the dividend check is already in my mail box.

Gotta have all those stadium windows covered too because no basketball player anywhere, ever played the game under any type of natural light, or combination of natural and artificial light.

I guess it's a good idea the MSFA and NCAA decided not to host the Final Four on one of our local frozen lakes. Gee, what a concept - the Final Four on Ice. Then again, by early April, substantial ice is usually off the lakes. That could be fixed simply by spending more taxpayer money by keeping the ice frozen artificially with cooling machines. In April! I should stop before I give the Brain Trust that is the MSFA "ideas". I wonder in which seats MSFA members will be watching the Final Four from?

You know, we have this lamp we've been wanting to get rid of. While we're asking kind of a high price, if you buy it and "rub" it, a Genie "could" pop out of it and grant you three wishes. The study we commissioned concluded it would be a good decision for you to buy the lamp. Anyone?

More on this Final Four Fiasco, at taxpayer expense, at CBS Local News.
Posted by Drake's Place at 11:22 PM