Sanders and Castro to Speak at ISNA, "Radical Islamist Convention". 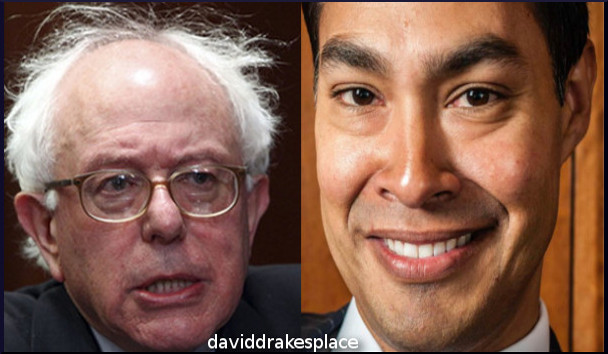 WASHINGTON, DC, USA, August 8, 2019 /EINPresswire.com/ — Presidential candidates Bernie Sanders and Julian Castro are scheduled to speak at the Islamic Society of North America (ISNA)’s convention in Houston on August 31. ISNA has been designated a Muslim Brotherhood entity by the US Justice Department.

Ares and Athena: Are these two [Sanders, Castro] brain dead, misinformed, or traitors?


Democratic presidential candidates Bernie Sanders and Julian Castro have agreed to speak at the convention of a radical Islamist group with ties to the Muslim Brotherhood and hostility towards progressive Muslims and values.
[.]
The U.S. Justice Department lists ISNA as an “entity” of the Muslim Brotherhood, a radical and often violentarm of the Islamist global political project. The Brotherhood’s goal is a worldwide caliphate with all of humanity living under sharia law.
[,]
Sanders and Castro, [are] apparently unaware of—or is unconcerned with—ISNA’s radical ideology, including expelling Muslims for Progressive Values, a pro-LGBT group, from its conference in 2017 or the fact one of ISNA’s past presidents endorsed the execution of homosexuals by sharia-based governments.
[.]
By speaking at the event, [Trevor Noah, host of Comedy Central’s The Daily Show, also slated to speak at the ISNA convention], Sanders and Castro are helping ISNA appear as moderate leaders of the Muslim-American community (not to mention helping ISNA raise money through ticket sales) [sic].

-
D.C. Presswire Archive
Ares and Athena Archive
Posted by Drake at 12:31 AM