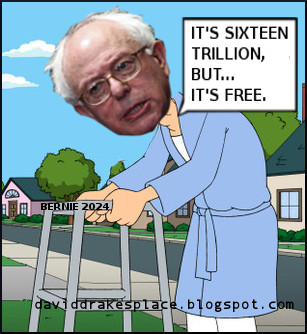 Democratic presidential candidate Bernie Sanders released a $16.3 trillion climate plan on Thursday before touring a Northern California town ravaged by wildfire, declaring the setting a "wake-up call for our entire nation" to the dangers of a warming planet.

"Climate change is a major, major crisis for our country, and the entire world, and one of the manifestations of that crisis is what happened here," the Vermont senator said as he walked through a burned-out mobile home park in Paradise alongside people who lost their homes in last November's deadly blaze.

Sanders' climate plan calls for the United States to move to renewable energy across the economy by 2050 and declare climate change a national emergency.

When has anyone, especially a Liberal Full-Fledged Socialist Bernie accurately predicted the cost of something? Yeah, his plan will come in on time and on budget. Much like California's Train To Nowhere, as just one example.

Is Bernie sure $16 Trillion is enough?

-
Chattanooga Times Free Press Archived
Posted by Drake at 4:32 AM