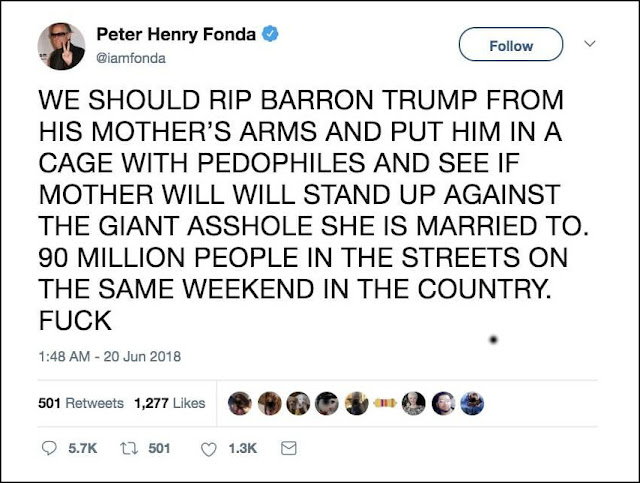 Snopes even says the above Tweet by room-temperature Fonda is true, so it must be.

Continued from the above Snopes link:

Fonda also proposed harassing and intimidating families and children of federal agents involved in immigration law enforcement in two tweets which have also since been deleted, but the authenticity of which have also been corroborated. Fonda has not acknowledged or apologized for those.

-
Aging, mediocre actor with famous last name, who otherwise would have been a nobody, dead at age 79. MSN:

Peter Fonda, the two-time, Oscar-nominated star of "Easy Rider" and more recently films such as "Ulee's Gold" and the remake of "3:10 to Yuma," has died, his manager confirmed to TheWrap. He was 79.
[.]
"In one of the saddest moments of our lives, we are not able to find the appropriate words to express the pain in our hearts. As we grieve, we ask that you respect our privacy," his family said in the statement to People.

"We are not able to find the appropriate words...".

"Easy Rider"...one of the most overrated films ever made.