Epstein autopsy observed by celebrity pathologist Michael Baden. Epstein described as being in "good spirits." Removed from suicide watch per his attorneys request. 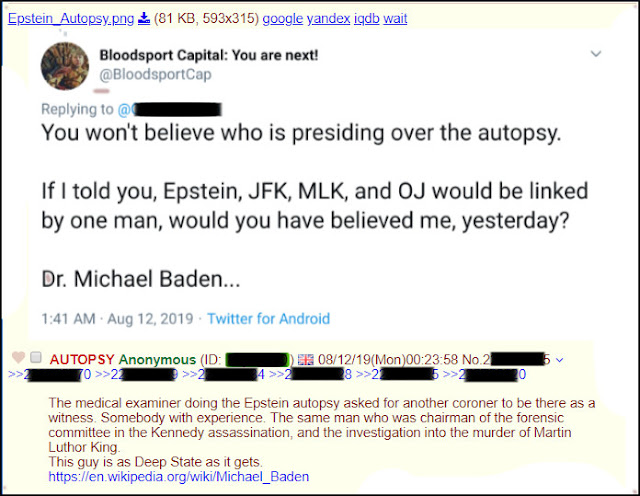 
Chief Medical Examiner Barbara Sampson also noted that Epstein’s representatives have hired celebrity pathologist Michael Baden to conduct an independent autopsy and they were allowed to observe the autopsy. Baden, who served at the city’s chief medical examiner in late 1970s, has made a career investigating high-profile deaths, including Michael Brown, who was killed by a police officer in Ferguson, Missouri, and former New England Patriots star Aaron Hernandez. Baden also testified at the murder trials of O.J. Simpson and Phil Spector.

It was not immediately clear if Epstein’s body had been released or who was going to be claiming it, or who “those representing the decedent” were.
[.]
“People close to Epstein” had said Saturday that “he seemed recently to be in good spirits” and they “expressed concern about the possibility of foul play,” according to the account of  “one person familiar with their discussions” cited by The Washington Post on Saturday.

NY Post: Epstein met with attorneys up to 12 hours a day.


Epstein had been meeting with his attorneys for up to 12 hours a day before they requested that he be taken off suicide watch, sources familiar with the matter told the Wall Street Journal.


The convicted pedophile, who was 6 feet tall, apparently killed himself by kneeling toward the floor and strangling himself with the makeshift noose, a law enforcement source said Monday.