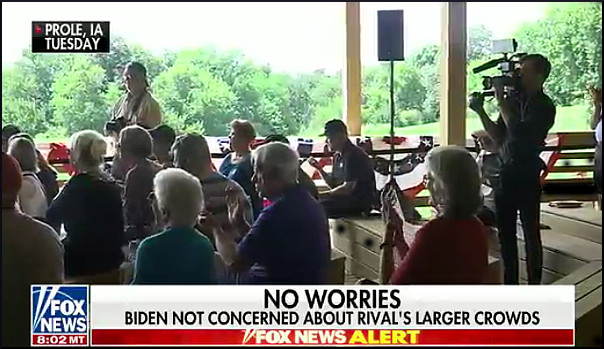 Biden attracts crowd "in the teens" on Tuesday in Iowa.

Joe Biden surprised to hear his crowd size is not the largest:

Video via You Tube

"What I'm trying to do is go around from town to town and I'm drawing as big of crowds, or bigger than anybody," Biden said in Iowa on Tuesday. "Have you seen anybody draw bigger crowds than me in this state?"

"Yes," Doocy responded before noting that he saw a bigger crowd for Sen. Elizabeth Warren when she visited Des Moines in January.

"The vice president didn't seem to like that because a few minutes later, he singled me out," Doocy said on "Special Report."

Biden told Doocy he was a "big boy" and could handle Doocy allegedly coming after him. "I mean, I know you, I know you're going to go after me no matter what I've got. Yeah, you and it's OK. Good. I'm a big boy. I can handle it," he said.

Biden makes a statement that is factually incorrect, gets questioned on it, and his response is, "you're going to go after me." If Joe could say something accurate, there wouldn't be a need to question him. Joe doesn't understand this. He's entitled to his own facts propaganda - and no one can question him.
Posted by Drake at 8:49 AM