One of Satan's minions, John Podesta, just happens to be in New Zealand and Australia days prior to the mosque shootings. Conspiracy? I'm not saying that at all. Eerily coincidental? Yes. Note timestamp of March 13 at bottom of below Podesta tweet: 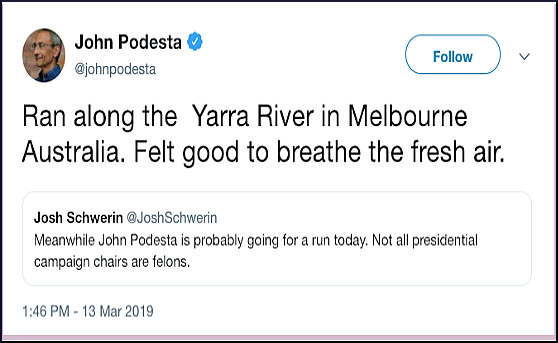 
One of the United States' top political advisors has described Jacinda Ardern's ascent to prime minister as a "bright spot" at a time when populist movements were winning political success across the world.

John Podesta, who served as chief of staff for President Clinton, was a top advisor for President Barack Obama and was chairman of Hillary Clinton's unsuccessful 2016 election campaign made a short visit to Wellington as part of events for Global Progress, an alliance of "progressive" political movements.
[.]
[Podesta] warned that the use of social media could whip the public into a "frenzy", making politicians who exploited it an ongoing danger, risking democratic values.

"The natural tendency [of social media] … is to move people into the extreme, to support, inflame and influence people through social media channels."

It seems that Podesta, the purveyor of prurient art, conveniently and deliberately forgets the relentless media manipulation and rhetoric driven by, and from, The Left.