Jake Patterson - I hope he spends as little time as possible inside a jail cell.


Jake Patterson, the man who abducted 13-year-old Jayme Closs and held her captive until she escaped months later, pleaded guilty in an emotional court appearance on Wednesday.

"Bye, Jayme," Patterson said, before he was led away.

Patterson, 21, shot and killed Closs' parents on Oct. 15 and kidnapped the 13-year-old from her home in rural Barron, Wisconsin.

As he pleaded guilty to two counts of first-degree intentional homicide and one count of kidnapping, Patterson appeared emotional, with his voice cracking at times.


[Patterson] wept as he entered a plea to each count, with his lawyer leaning over to comfort him. Patterson tapped his foot nervously and, at times, his manacles rattled as he moved. 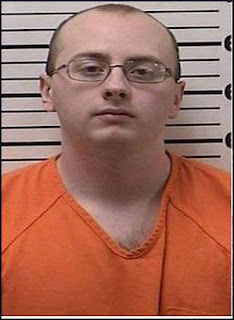 I hope this sniveling, cowardly piece of shit spends as little time in a jail cell as possible. It's too bad Wisconsin doesn't have the death penalty. But I'm sure there's plenty of inmates with a shiv who'll help Patterson into the afterlife.

Patterson needs someone like Vern Schillinger to go all-out "Oz" on him. No mercy.
Posted by Drake's Place at 3:07 PM