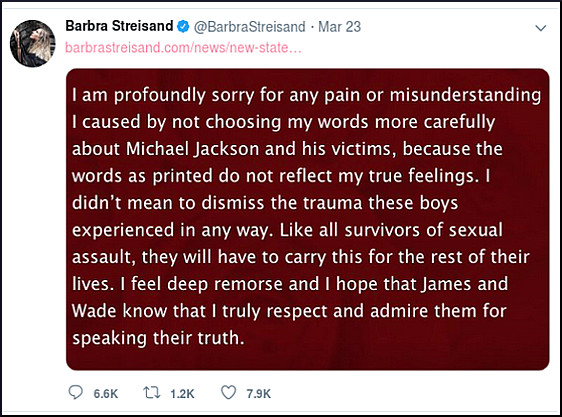 What she previously said:


“[Michael Jackson's] sexual needs were his sexual needs, coming from whatever childhood he has or whatever DNA he has," [Barbra] Streisand told The Times. “
[.]
"[ I guess I blame the parents ]."
[.]
Dan Reed, the director of “Leaving Neverland,” seemed shocked at Streisand’s comments. “'It didn’t kill them” @BarbraStreisand did you really say that?!,'” Reed tweeted Friday.

Others were equally outraged.

She's not "profoundly sorry." She knew exactly what she was saying. Her words were not uncarefully chosen. This all about her and her benjamins.
Posted by Drake at 3:19 PM