“It was clearly obvious after 2007 that [Ed Buck] had a serious personality disorder,” [said former West Hollywood City Councilmember, Steve Martin].
[.]
Asked if he and his colleagues suspected drug abuse as a potential cause of Buck’s allegedly hostile behavior the former councilman was definite in his reply.

“Everyone knew it,” Martin said. “It’s bullshit if they say they didn’t. It was like a family; you know, everyone in the family knew it. There were people who embraced it and they were, frankly, members of city council. They knew Ed had a lot of problems; they knew Ed was a controversial member of the community.”
[.]
"If there was ever anybody in West Hollywood whose bed you expected a dead body to turn up in, it was Ed Buck,” [said Martin]. 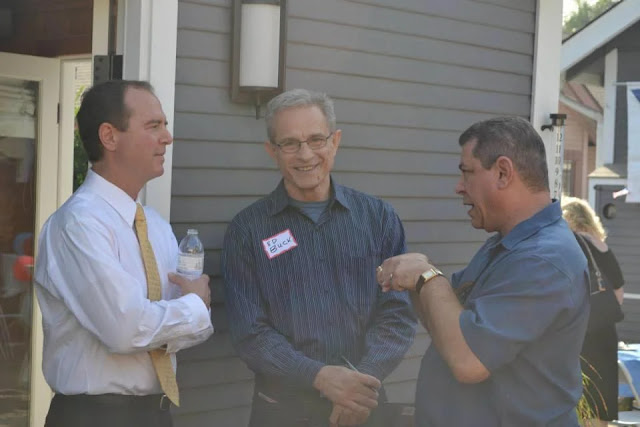 Perhaps DUSTING all the drug paraphernalia for FINGERPRINTS might reveal Buck played a role in the deaths of these men?

"Oh, those drugs and paraphernalia...they're not mine. The other guy, who's now dead in my apartment, brought them."

Who carries on their person, and brings with them, 24 syringes, five glass pipes, plastic straws and multiple plastic bags when "visiting a friend"?

Clearly, the DEMS are circling their wagons, protecting their own, Ed Buckmelter - one of their mega-donors.

Who is arrested and taken into custody? A man, peacefully protesting outside Ed Buck's apartment. From WeHoVille:


As the vigil wound down, Dennis Gleason, the policy director for Los Angeles City Councilmember Joe Buscaino, moved to the center of Laurel Avenue and sat before a candle as a protest.  Gleason was approached by Sheriff’s deputies who asked him to move.

“I get it. I’m a threat to public safety, so you’re going to have to remove me,” Gleason said. “Why haven’t you removed Ed Buck?”

Gleason was handcuffed and taken to the West Hollywood Sheriff’s Station.