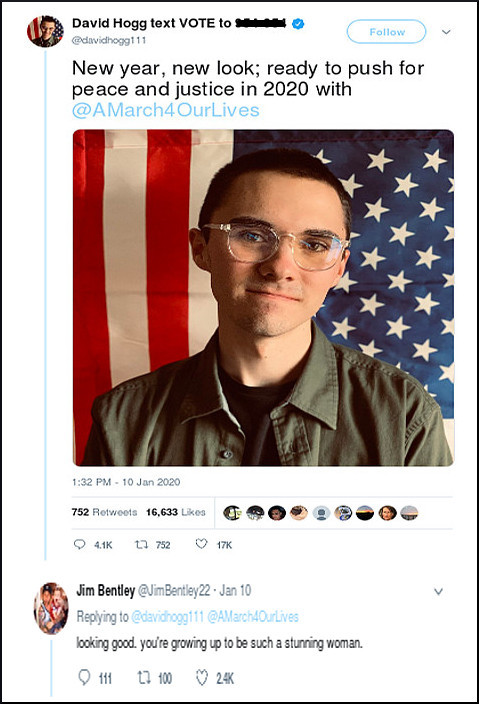 Left-wing activist David Hogg is trying to work his way back into the spotlight, but changing his look isn’t earning him the kind of recognition he was thinking about.

While most people use the beginning of a new year to make some changes in their lives, Hogg’s attempt at a “new year, new me” tweet was panned by a fair few of the 2.5K comments as of this publishing.

The Tweet and all the mockery @ David Hogg. Much fun at the expense of The Survivor.
-
Hogg "new year, new look" Tweet Archived
Posted by Drake at 10:01 PM

Such a fashionista. Wearing dungarees is back in style for the commies.

Anon, And note the "smart glasses". Surprised he didn't opt for the old-school Elton glasses.
Thanks for commenting.

Give him a tennis racket, and he can play Billie Jean King in another biographical turd of a movie.

Dude reminds me of that CNN commentator Michael Kinsley, that smarmy left wing liberal that argued with Robert Novak in the 1980's. Weird.

Jess, Hogg as BJK is perfect casting. (no pun intended RE your arm).
Hope you're feeling better.
Good to hear from ya.

Anon, I know who you mean and he does resemble Kinsey. Great eyes and memory!
Thanks for stopping by.