This is not good. Julian Assange moved to prison hospital. 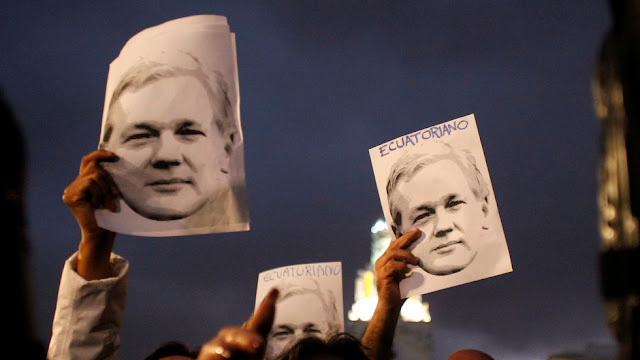 WikiLeaks founder Julian Assange has been moved to the hospital wing of the Belmarsh prison in the UK, prompting concerns about his health pending the hearing on his extradition to the US.

Assange’s health had already “significantly deteriorated” during the nearly seven years he spent inside the Ecuadorian embassy in London, and has continued to get worse over the seven weeks he has spent in Belmarsh, WikiLeaks said in a statement on Wednesday.


No one from the court had any comment on the issue to Reuters nor did the Prosecutor's office. Sweden just reopened the rape investigation in early May.

You've probably heard all about this story from the MSM Talking Heads because they believe so adamantly in sticking up for their fellow journalists and truth-seekers. Like the frequent time and coverage they've devoted to Jamal Khashoggi.

Assange has the dirt on Hillary Clinton and the Obama Deep State. Otherwise she wouldn't have asked, "can't we just drone this guy?"

We probably won't hear much from the MSM on Julian Assange. He's more of a threat to them and they are the water-carries for The Left who view Assange as an enemy. Pray for Julian Assange.
Posted by Drake at 8:32 PM