Ruth Ginsburg called in sick for work today. A 4Chan claim is she died Saturday night. 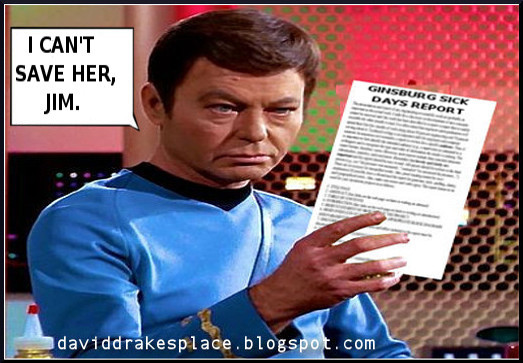 Justice Ruth Bader Ginsburg was absent Wednesday from oral arguments at the Supreme Court due to a “stomach bug,” according to a statement from Chief Justice John Roberts.

Ginsburg is “indisposed due to illness,” Roberts said at the start of the day’s hearings.

The health of the 86-year-old liberal justice, known to her fans as “the notorious RBG,” has been a subject of intense public focus in the past year, sparked by a fall that broke three of her ribs last November. After that health scare, she underwent surgery for cancer on her lung in December 2018 and radiation treatment for pancreatic cancer in August 2019.

Then there's this tidbit from an archived 4Chan thread. Hmmmmmmm...

"Ginsburg has died. My brother is a paramedic. He just texted me 10 minutes ago. An ambulance was called to Ginsburg's residence late last night and she was rushed to hospital but doctor's [sic] were unable to resuscitate her. I presume the news will hit the airwaves at some point today."

Anyone run across any Casting Call Auditions for RBG look-a-likes on Craigslist? I haven't checked.
Posted by Drake's Place at 9:20 PM