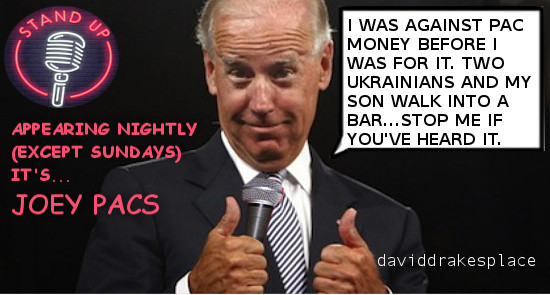 With campaign cash coming into Joe Biden's coffers more slowly than his 2020 Democratic rivals, the former vice president reversed a long-standing position and will now welcome help from outside, free-spending super PACs.

"In this time of crisis in our politics, it is not surprising that those who are dedicated to defeating Donald Trump are organizing in every way permitted by current law to bring an end to his disastrous presidency. Nothing changes unless we defeat Donald Trump," Biden campaign spokeswoman Kate Bedingfield said in a statement.

Last month, a different Biden campaign spokesperson, T.J. Ducklo, told reporters his campaign is committed to rejecting any super PACs that may join the race.
[.]
Voicing opposition to super PACS has long been a point of pride for Biden, who wrote in his 2017 book Promise Me, Dad that if he ran in the 2016 race, he would have rejected any help from a super PAC.

“I knew there was big money out there for me. But I also knew people were sick of it all… rejecting super PAC money wasn't a hardship for me," he wrote.

The flip-flop is a tacit admission by the Biden campaign that it's growing concern that it may not have enough money to compete in Democratic primary. Should outside groups begin fundraising on behalf of Biden's candidacy, the former vice president would be the only candidate in the race to have a super PAC on his behalf.

"In this time of crisis in our politics..." - yeah, that's why Joey Pacs needs the campaign cash. Not because his candidacy is hemorrhaging and imploding. No....
Posted by Drake's Place at 9:02 PM