Paul Pelosi, Jr., son of Speakeress of The House, Nancy Pelosi, visited Ukraine in 2017 to talk about oil soccer self-enrichment. All things being equal, I never really trust someone who, when talking to you or answering a question, can't or won't make eye contact. Watch Paul for yourself.

Via The American Mirror.

Copy and RT/publish this clip. It's being yanked down at YTube. Use the code at The American Mirror link.


Why does Nancy Pelosi’s son care about the state of soccer in Ukraine?

Paul Pelosi, Jr., a San Francisco-based investor, recently appeared on Ukrainian television to talk about his business in the country.

[Paul] Pelosi, executive director of the Corporate Governance Initiative, was asked why he was in Kiev.

“Today we’re here to talk about soccer,” Pelosi said.
[.]
The House Minority Leader’s son’s work there is curious, given the Democrats’ attempts to collaborate with Ukraine to attack Donald Trump.

InfoWars: Nancy Pelosi’s Son Was Exec At Gas Company That Did Business In Ukraine.

Now, unearthed records reveal that Paul Pelosi Jr. was an executive of a gas industry company that did business in Ukraine – and his mother Nancy Pelosi was featured in one of the company’s promotional videos.

BOOM: Nancy Pelosi's son Paul Pelosi Jr. (who went to Ukraine in 2017) was a board member of Viscoil and executive at its related company NRGLab, which DID ENERGY Business in UKRAINE!

And Nancy Pelosi appeared in a promotional video for the company!

Here's another video NRGLab posted the SAME DAY confirming in the Youtube text description they did energy business in Ukraine: "For example, Mika Newton helped to secure the rights to build a plant for the production of SH-boxes in Ukraine."

And this (embedded in Patrick Howley's Tweet), a fundraiser for Adam Schiff in 2013 at the home of alleged arm-dealer Igor Pasternak. 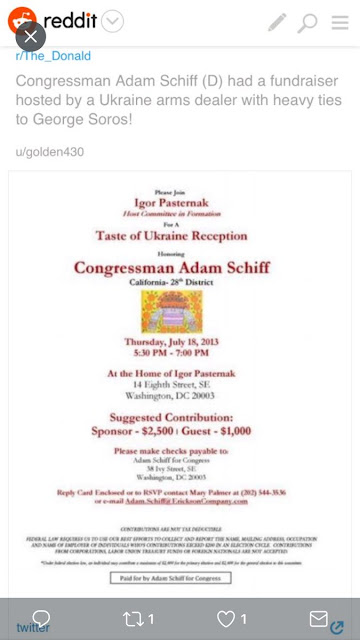 DEMS doing what they do best, accusing others, (in this case, their manufacturing of criminal activities by President Trump and Ukraine), of doing what they themselves are guilty.
-
InfoWars Archived
Patrick Howley (Twitter Threat) Archived
Posted by Drake's Place at 9:08 PM