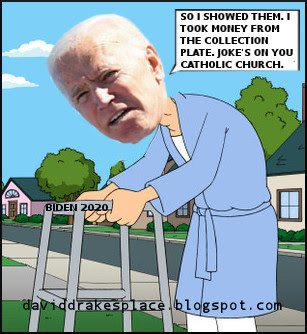 FLORENCE, S.C. – Former Vice President Joe Biden, a candidate for the Democratic nomination in the 2020 presidential race, was denied Holy Communion on Sunday morning at a Florence church.

Father Robert E. Morey of Saint Anthony Catholic Church confirmed Monday afternoon that he had denied the presidential candidate Holy Communion because of his stance on abortion. Biden, a lifelong Catholic, had attended the church's 9 a.m. Mass.

Communion is one of seven sacraments in the Roman Catholic Church. The others are baptism, reconciliation, confirmation, marriage, anointing of the sick and holy orders.

In communion, parishioners receive the Holy Eucharist, a wafer and wine that when consecrated become the body and blood of Jesus, according to Catholic doctrine. In order to receive it, a Catholic must be in the state of grace, have gone to confession since his or her most recent mortal sin, have a belief in the doctrine of transubstantiation (a belief that the wafer and wine become the body and blood of Jesus), observe the Eucharistic fast and not be under censure.

"Sadly, this past Sunday, I had to refuse Holy Communion to former Vice President Joe Biden," Morey told the Morning News via email. “Holy Communion signifies we are one with God, each other and the Church. Our actions should reflect that. Any public figure who advocates for abortion places himself or herself outside of Church teaching.”

Morey said that as a priest, it is his responsibility to minister to those souls entrusted to his care and that he must do so in even the most difficult situations.

“I will keep Mr. Biden in my prayers," Morey added.

An unconfirmed source said Biden replied, "Hey, man, fact of the matter is this is Vermont, man."
- - -
SCNow Archived
Posted by Drake's Place at 6:02 PM